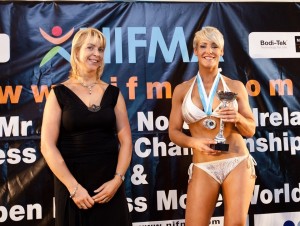 On Sunday 6th November El Owner and fitness instructor of Polercise competed in the NIFMA, held at the La Mon country club in Belfast.

Judges on the day were looking for the best overall body, healthy appearance, stage presence and confidence! The overall Mr and Miss Northern Ireland Fitness Model winners were those who scored the best overall percentage in all 3 rounds: Formal Wear, Sports Wear, in which El was placed 2nd and Swim Wear in which she was placed 1st resulting in her winning 1st place in her class of the over 30s, putting her through to the final line up in which she placed an extremely close 2nd.

“Originally I had been invited to demonstrate a pole routine at the event, I only decided 2 weeks before that I might as well stick on a formal dress and a bikini and enter the other 2 rounds while I was at it.  So for the 2 weeks prior I cut out all the junk food, I really didn’t expect to win my category never mind being placed in the final 2 as some of the competitors there have been preparing for up to 10 weeks in advance. I currently teach 10 hours of pole a week so I guess that, coupled with the healthy eating plan done the trick.  It’s defiantly given me a real incentive to stick at it and really go for it next year. It’s a great competition in that it looks for the healthiest appearance, not the super skinny or the body builder type, and it offers lots of great prizes and opportunities for the winner, I’d encourage any of the girls at Polercise to go for it next year”!

We are very excited to welcome you back to Polercise. Before you attend class, we want to make sure you understand that in light of the current Covid-19 pandemic we have changed a number of policies and procedures at the studio.